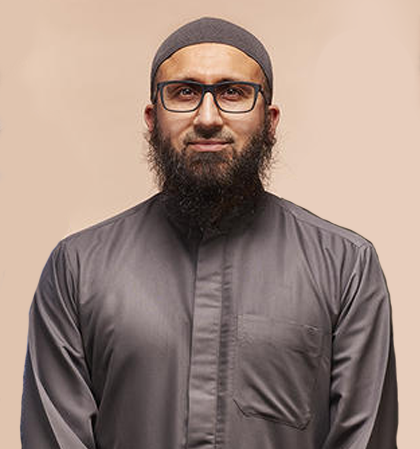 Imam Uzair Akbar is a well-known respected scholar, dynamic speaker, and a prominent leader in the Muslim community of Australia. He has been the appointed Imam for over two decades in the century-old Holland Park mosque located in Brisbane. He is currently the President of the Councils of Imam Queensland (CIQ), member of the ANIC (Australian National Imams Council), Director of Centre of Excellence (Australian Youth Welfare Trust), Director of ISHP Youth Club, and sits on the board of many other not-for-profits organizations.

His passion, zeal and commitment speak volumes of his 24-year tenure in this place. Imam Uzair has been gifted with a unique way of connecting to the common audience through his Islamic lectures, Tafseer, and sermons. His forte includes connecting with the youth and giving common life analogies that really strike into the heart of his listeners.
Imam Uzair was born in England and completed his Islamic Scholar (Ulema) course overseas before coming to Australia 24 years ago. Imam Uzair has a very close relationship with several prominent scholars including the eminent Islamic finance scholar Justice (ret.) Mufti Taqi Usmani having hosted him to Australia on a few occasions. He is a long-term advocate for the Muslim community in Australia and regularly appears in many multi-faith forums, open days and hosts a variety of visits for schools, professionals, defense and police personnel. He can be seen in various print articles, on TV programs such as ABC’s ‘You Can’t Ask That – Muslims’ (S01E07) or the very popular 3 part documentary “The Mosque Next Door” on SBS Australia. youtu.be/HX4C6rD_iZo.
An avid sports fan, when he does get a chance to take a break from his busy schedule, you will see the Imam swinging his golf clubs or perfecting his cover drive.